Previous Next
Consensus Emerging Behind Large-Scale Solar in Georgia

Last week was a week of superlatives. The largest battery systems in the world were approved in California, and Entergy (an unlikely actor) signed a contract with Canadian Solar for the largest solar plant in Mississippi. If one more of these stories were to break, we might have to hit the thesaurus.

On Thursday, First Solar and Miami-based developer and independent power producer Origis Energy held a ceremony to celebrate the beginning of construction on the GA Solar 4 Project. Origis bought the project three weeks ago from First Solar, which is the party who will lead construction of the 200 MW-AC project, using over 400,000 of its large-format Series 6 modules.

This makes GA Solar 4 the 2nd-larges solar project East of the Mississippi, second only to the massive 400 MW Piedmont project in Virginia.

As seen in the above photo, everybody was there. And by everybody, I’m including not only county, Origis and First Solar officials, but at least three sitting members of the Georgia Public Service Commission. This includes two Republican solar champions – Chair Lauren “Bubba” McDonald and Vice-Chair Tim Echols – as well as Patricia Pridemore (R), who was appointed by Governor Nathan Deal (R) and who has been a favorite of utility giant Southern Company.

Georgia has been an interesting case study in which Republicans – led by Bubba McDonald and Tea Party leader Debbie Dooley – have been staunch advocates for solar, and starting as early as 2012 pushed Southern Company subsidiary Georgia Power to deploy significant amounts of large-scale solar in its service area.

This was alluded to by First Solar. “This project is a direct result of the Georgia Public Service Commission’s visionary efforts to expand solar in the state,” said Omar Aboudaher, regional director of project development for First Solar. “We are more hopeful today that the GA Solar 4 project is a stepping stone to the greater expansion of solar energy in the state.”

Local economic development is another motivating factor behind the growth of solar in the state, which includes the large city of Atlanta but also significant areas of rural farmland, such as Twiggs County, where GA Solar 4 is located.

“Twiggs County leaders have worked closely with First Solar to make this project a reality,” said Johan Vanhee, managing director, business development and operations for Origis Energy. “It will make a very strong positive difference in the area’s economic growth and long-term tax base.”

As such, the groundbreaking for GA Solar 4 is a view into the new consensus around large-scale solar in Georgia – a consensus which includes regulators, local governments and to a degree Southern Company. 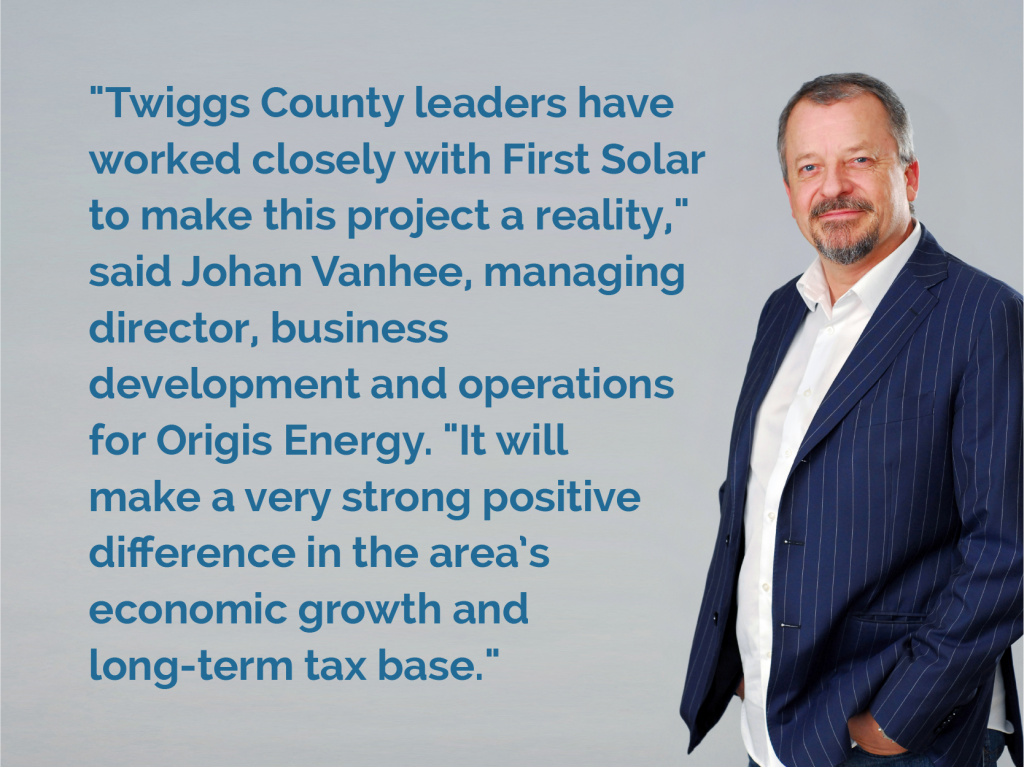