Although Texas has long been known for its vast oil and gas resources, investors are now harnessing its wind and solar generation potential too. “Energy companies want to become more sustainable and less dependent on fluctuating energy prices. Texas is the natural place for them to invest,” says Jason Giulietti, president of the Greater San Marcos Partnership, the lead regional economic development agency in San Marcos, Texas.

Texas was the main US recipient of renewable projects in 2019, attracting a record 21 projects – a figure that rises to 30 with the inclusion of inter-state US projects (projects from companies based in other US states), according to greenfield investment monitor fDi Markets. If it were a country, Texas would be the fifth largest recipient of greenfield renewable energy projects in 2019.

With its large availability of agricultural land and resources, Texas is naturally suited for renewable energy generation, according to Robert Allen, president and CEO of Texas Economic Development Corporation. “The wind blows stronger at night while the sun is sharpest at midday, enabling Texas to avoid the peaks and troughs that are generally associated with the flow of renewable energy,” he says.

The state has its own unique internal competitive market, the Electric Reliability Council of Texas (Ercot). The grid was deregulated in 1999 by the then-governor, George W Bush, who said: “Competition in the electric industry will benefit Texans by reducing rates and offering consumers more choices” when announcing the legislature.

Ken Locklin, senior US policy advisor and director of Impax Asset Management, says: “Since Texas was an oil and gas state, the deregulated market was designed to make it easy to develop new oil and gas resources. The same rules make it easy to develop a new renewable resource. While the price for a solar panel or megawatt of storage is similar to California, it’s the lower regulatory prices that make Texas more economically advantageous.” 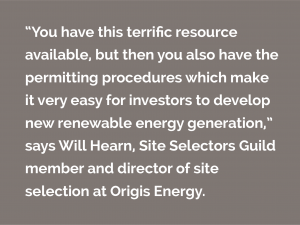 Renewable energy uptake in Texas has been encouraged by subsidies, allowing corporations to ‘go green’ without incurring higher costs. Federal subsidies really began in 1999, as part of a renewable energy mandate passed by the Public Utility Commission of Texas, which aimed to produce 10,000 megawatts of renewable capacity by 2025. Texas surpassed the goal by 2009.

Between 2010 and 2019, federal subsidies for wind and solar nationwide totalled $71.2bn, compared to $25bn for oil and gas, according to statistics from the Texas Public Policy foundation. Although the solar investment tax credit is scheduled to phase out by the latest US Spending Bill agreed by Congress, solar installations more than doubled across the country between 2017 and 2019, and are unlikely to slow down in the long term.

Improvements in manufacturing efficiency have helped the cost of solar photovoltaics drop 81% from 2009 to 2019, according to statistics from the UN Global Trends in Renewable Energy Investment Report 2019.

“The price of renewable energy is decreasing to the point where it does not need subsidies to be cheaper than other sources,” says Ravi Maghani, global head of solar research at Wood Mackenzie.

For the first time, wind energy generation overtook coal in Texas, generating 22% of the electricity mix in the first half of 2019, according to data from Ercot. With more than 20,000 megawatts of installed wind capacity, Texas leads the country in wind-powered generation, producing around 28% of the US wind-powered electricity in 2019, according to the US Department of Energy.

Local policies have played a significant role in increasing the state’s wind transmission. The Texas Power system completed its $7bn development of 3500 miles of transmission lines to special areas defined as competitive renewable energy zones (CREZ) in December 2013, enabling additional wind transmission of 18 gigawatts and reduced wind wastage. “The CREZ project connected the wind resources of West Texas to the demand in East Texas where the majority of the population lives,” says Mr Allen.

Since Texas’s transmission lines do not cross state boundaries, investors do not have to wait for federal permits to develop renewable generation projects. “You have this terrific resource available, but then you also have the permitting procedures which make it very easy for investors to develop new renewable energy generation,” says Will Hearn, Site Selectors Guild member and director of site selection at Origis Energy.

As renewables present an increasingly competitive option, large energy corporations are taking advantage of these local policies by purchasing green energy and selling it via virtual power-supply agreements on the competitive Ercot market.