Total Corporate Funding in Solar Sector Comes in at $9.1 Billion in 2016

Previous Next
Total Corporate Funding in Solar Sector Comes in at $9.1 Billion in 2016

Mercom Capital Group, llc, a global clean energy communications and consulting firm, released its report on funding and merger and acquisition (M&A) activity for the solar sector in 2016.

“It was a challenging year for solar companies in terms of fundraising even as demand is expected to reach an all-time high,” commented Raj Prabhu, CEO and Co-founder of Mercom Capital Group. “However, 2017 looks better than expected as lower module prices are expected to boost installation levels,” he added. 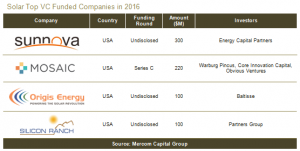